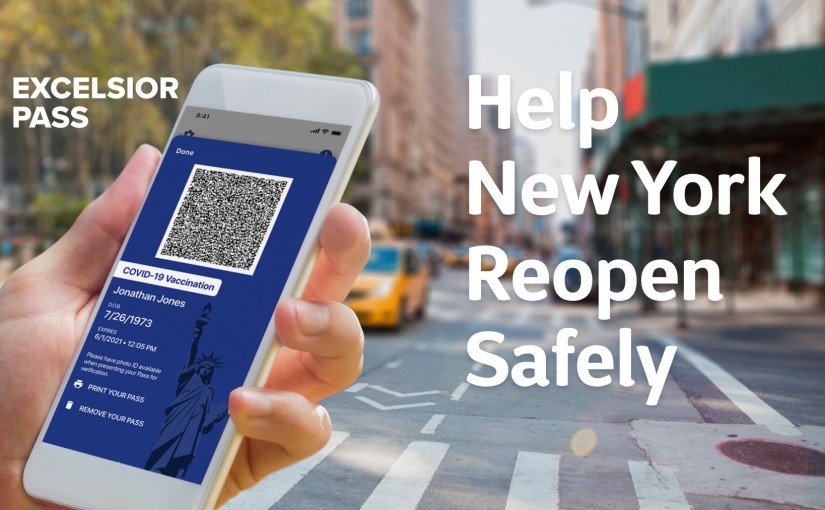 Last week, Mayor Bill de Blasio of New York City announced the first wide-scale vaccine passport system in the U.S., the so-called “Excelsior Pass.” The few objections from the left to this scheme are not concerned with the inherent impracticality and immorality of regulating personal behavior, but with the disproportionate impact the requirement will have on certain minorities. In the Critical Race Theory framework, that makes it inherently White Supremacist.

A few grifters have come out of the woodwork to call vaccine passports racist, most notably the mayor of Boston. But this time Twitter and the media have generally decided that it isn’t really worth hearing about this time. Apparently, racism is no longer a bigger “public health crisis” than Covid, unlike a year ago when Covid deaths were much higher. The most visible manifestation of these arguments is actually a parody/hoax that circulates under #askmewhy, courtesy of the 4Chan trolls. They are are ridiculous, but at the same time are a pretty convincing facsimile of actual arguments used by BLM and similar groups about other topics.

But the case that vaccine passports are White Supremacist are indisputable if you understand the world through the Critical Theory framework. 39% of black New Yorkers are vaccinated versus 53% of whites, a ratio that is similar to the national average, though each state can differ widely. This difference means that a policy requiring proof of vaccination from everyone is systemically racist. Pointing out that vaccination status is an objective, racially-neutral standard is “the myth of color blindness.”

The parts of critical legal theory and critical race theory that focus on law and policy are founded on the quest to show that seemingly neutral laws and universally beneficial norms are actually systems of racism. Their modus operandi is to find any inequity – any statistical difference between races other than average melanin – and connect it to a law/policy/norm that has a “disproportionate impact.” By dint of having a disproportionate impact, that law/policy/norm is assumed to be rooted in White Supremacy.

For example, if a bar in New York checks everyone’s proof of vaccine along with proof of age at the front door, this would mean fewer Black and Latino patrons would be allowed entry because fewer of them are vaccinated. Requiring proof of vaccination is White Suppremecist because it has a “disproportionate impact” because those allowed entry would include a disproportionate number of Whites and Asians. It’s just like making the bar “whites only,” except somehow, the structures of systemic racism erected to perpetuate White Suppremecy find a way to favor Asians, 82% of whom are vaccinated.

These are the logical implications of the Critical Race Theory that Democratic politicians found so useful to hit their opponents with back in 2020 to rally their base and scare independents. If it wasn’t obvious six months ago it should be obvious now that the politicians who claimed that requiring ID to vote was racist didn’t really mean it. Some of them are even claiming the bogeyman Fox News made that up out of thin air. If voter ID is “Jim Crow 2.0” then vaccine passports are Jim Crow 3.0.

On average, fewer Blacks choose to get vaccinated than Whites, which is the obvious cause of the discrepancy in the impact of vaccine passports. There’s a cultural difference underlying this difference in choices, and it’s far more tangibly linked to the racism of decades and even centuries past than to modern policies.

The legacy of slavery and discrimination in the 100 years after emancipation has led to the disproportionate prominence of what Thomas Sowell identified as “redneck culture” in Black communities. Southern and transplanted inner-city Blacks inherited culture and language from the Scotch-Irish immigrants who constituted most of the poor Whites they lived alongside in the south. “Black ghetto” culture, according to Sowell, is rooted in the dysfunctional “redneck culture” rather than embedded in the skin. (See Thomas Sowell, Black Rednecks and White Liberals for a look at the cultural influences of “redneck culture” and J. D. Vance, Hillbilly Elegy, for a look at this culture in modern poor White communities.)

But critical theory adherents like Boston Mayor Kim Janey prefer to attribute all discrepancies to racism. Janey compared vaccine passports to slavery-era freedom papers and birtherism. “There’s a long history in this country of people needing to show their papers,” she said, referring to New York’s policy.

Mayor de Blasio, who just five months ago announced a Racial Justice Commission to dissect New York City’s charter in search of structural and institutional racism, now says Janey and other activists accusing his policies of perpetuating structural racism – policies that very clearly have a disproportionate impact – is “absolutely inappropriate.”

Politicians like de Blasio have scoffed at the Critical Racial Theory activists they “stood alongside” last year, now that those activists might hinder, rather than help, their attempts to exercise control. It turns out that for those who crave power, CRT really is “just a tool.” Not a tool for academic analysis, but a tool to try to “dismantle systems of oppression” that get in the way of politicians’ consolidation of power, like the Senate Fillibuster. But critical theory is a dangerous tool that may even have a mind of its own, as some cynical politicians may find out. 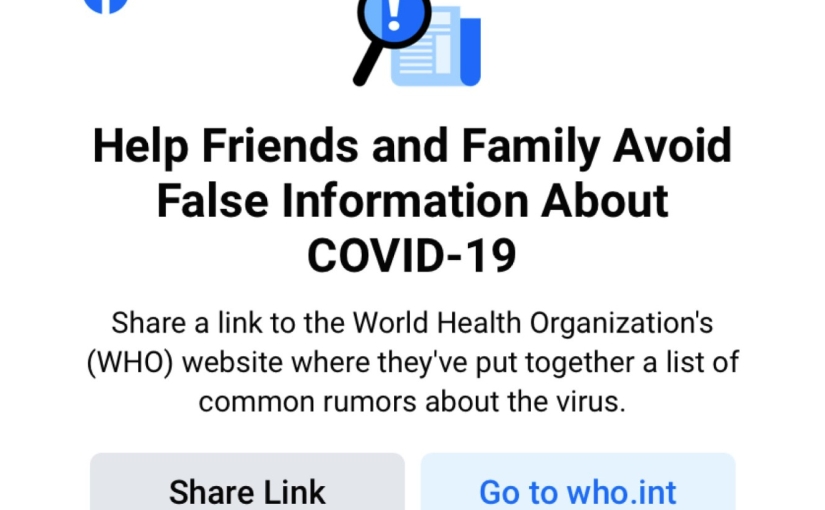 Facebook has ramped up its efforts to control the flow of information since Biden’s proclamation two weeks ago that it was “killing people” by allowing people to post “misinformation” about Covid-19 and vaccines. Now not even job posts that mention the need for potential employees to be tested or vaccinated can escape the dreaded “Visit the COVID-19 Information Center” banner. It’s gotten to the point where they are no longer just suppressing incorrect facts, but unapproved opinions as well.

Because of this, many people are reaching a point where they consider official disapproval to be a mark of truth. Conspiracy theorists – who have always posted and shared made-up crap under the radar – held this view for years. I suspect that the modern flat Earth movement came into being when someone was talking to their conspiracy theorist buddy and argued that “Not everything the official sources say is necessarily false. Just because they say the Earth is round, that doesn’t mean you can really believe it’s flat.” To which the conspiracy theorist replied, “hold my beer.”

If we can accept the possibility that at least on rare occasions official sources might get something right, then we need to evaluate official claims on the strength of their evidence. Ideally, social media could be a great place for that process. Someone posts a claim, someone asks for evidence, the original poster or someone else posts evidence, someone replies to that with conflicting evidence or pointing out problems with their evidence, and so on, and if we could do this in a civilized manner, we might get closer to the truth. Conversation is necessary for understanding, scrutiny is the source of scientific knowledge, and opposition is the forge of experience.

Scrutiny often dismantles falsehoods, which is why – back in the days when there were lots of conspiracy theory groups on Facebook – they were careful to block any dissenting voices from their page. Rational, evidence-based discussions are the bane of both conspiracy theories and government propaganda, which is why censorship of rational discussions empowers both. Censorship doesn’t hurt conspiracy theories much, what they lose in Facebook traffic to their pages they more than make up for with the strange new credibility the censorship has given them and the “secret hidden knowledge” they can implicitly or explicitly promise.

Social media censorship often decreases the reach of true stories the mainstream media/DNC disagrees with, like the Hunter Biden emails or Covid-19 Wuhan lab-leak theory, but not so much that we haven’t heard of them. The most damage is done to open, skeptical discussion and exchange of intellectually diverse materials and ideas. Conspiracy theories can be marketed as “the video THEY don’t want you to see,” but the truth usually doesn’t get the benefit of that exciting heading.

Facebook censorship empowers not only conspiracy theories, but run-of-the-mill rumors. For example, I recently came across a claim that a conservative boycott of Coca-Cola over their noted support of critical race theory had successfully damaged their business.

This claim could be true, but I was skeptical, if only because of the fact that conservatives are notoriously lousy at following through on boycotts. The top-down control approach to baloney like this is to hide it, make it blurry to the audience, and/or to reduce its reach. But maybe there’s evidence. The rational, decentralized, libertarian approach is to ask for a source, which I did.

Facebook blocked my comment which was asking for a source because social media censorship is designed to prevent all controversial conversations. Any possibility of pointing out the need for a source or trading evidence with the original poster is automatically ruled out.

Of course, social media companies and news organizations are private companies and can legally censor whoever they want, as many libertarians will constantly remind everyone who will listen (though the government’s finger is clearly on the scale at this point). But libertarians should also know better than anyone else that you can’t derive morality from legality. And you can’t derive efficacy or practicality from either.

Rumors, hoaxes, and conspiracy theories about Covid-19 vaccines continue to thrive, despite (or possibly because of) social media’s censorship. But without the censorship, we might have a rational discussion about how necessary the vaccine is for certain populations or the need for mask mandates, and that’s even more unacceptable. Without censorship, we might be able to discuss the issue, to trade evidence, and maybe to convince each other of the right position. Or we might not, as humans often let their emotion override their reason. But it’s better than letting falsehoods go unchallenged by having no discussion at all.